February 21, 2014 We had our first good ride together traveling along Gorges du Dades. The gorge is extremely high and magnificent. The 15 miles includes many villages where the locals, especially the kids, would yell out “Bonjour” to us. We would always wave and reply and sometimes chat with them. The road was up and down and sometimes a challenge as we are building our climbing legs. At the end of the gorge we climbed into the large town of Timadriouine then dropped down into the desert. After a few miles we met Abraham who had prepared a nice lunch for us. After lunch we continued cycling to the next town of Tinerhin where we found another very spartan Berber hotel.

Saturday February 22, 2014 I awoke around 6 this morning to the sound of a crying puppy. From the terrace I could see two large dogs appearing to play with a small puppy. To my shock they were biting the puppy which finally succumbed and was carried off by them as a meal. Such is the life of some dogs here. I’m glad Jocelyn did not witness this. During this time another puppy was following them. This was probably a sibling. We have seen a lot of dogs alongside the road but have not been chased yet as we were on our U.S. tour. New Zealand dogs never chased us either. Abraham said that dogs hang out on the roads seeking food handouts. After breakfast we cycled a more strenuous gorge, Gorges du Todhr. It was basically a one lane road with many improvements under construction. It was also a very touristy area and the traffic was heavy as we negotiated the gravel roadside. During this ride both Jocelyn and I purchased long scarves from roadside merchants and fashioned them into turbans as a sun and dirt block. Once again we then dropped down into the desert where we met Abraham for lunch. At this point we opted for a two night trip to the Sahara Desert. Since it was four hours away by car we loaded the bikes on top of Abraham’s 4WD Toyota Land Cruiser. We drove to Erg Chebbi and were in time for the famous sunset camel ride where there were two camels and a guide waiting for us. We rode off into the sunset over the large sand dunes and one hour later into our camp for the night. This was our first time on a camel and it was fun but I would not do it again. It took a long time for me to loosen my grip on the saddle handlebar as it is a long way to the ground and people do occasionally fall. At camp we set out all of our gear inside a large community tent. After dinner we were soon asleep.

Sunday February 23, 2014 This morning I awoke to the sound of camels coming over a large dune. It was 6:30 and there was already a large group out for a sunrise walk. I climbed to the highest nearby dune and watched a gorgeous Sahara Desert sunrise. It is moments like this that make our trip so special. We had breakfast outside on a small dune, did our laundry then drove around the area and visited a nomad family and an African musical group. Back at the camp we hiked to the largest nearest dune, which was a 40 minute hike up shifting sands, and stood in awe as we watched the sunset.

Monday February 24, 2014 We broke camp early for a ride out of the desert to the small town of Oulad Chaker. On the way we visited a fossil factory that takes huge 400 million year old chunks from the Sahara when it was a sea and cuts these down to make various objects showing the old snails, fish, and squid. Tomorrow we will head north to Fez, back into the Atlas Mountains. 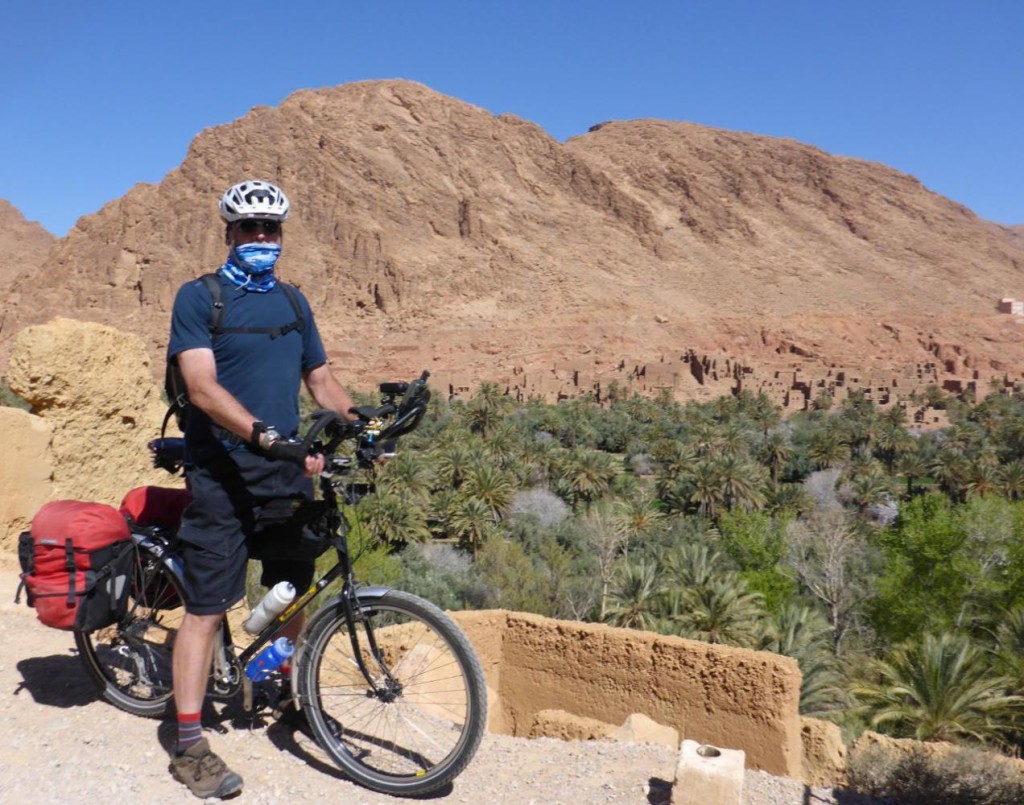 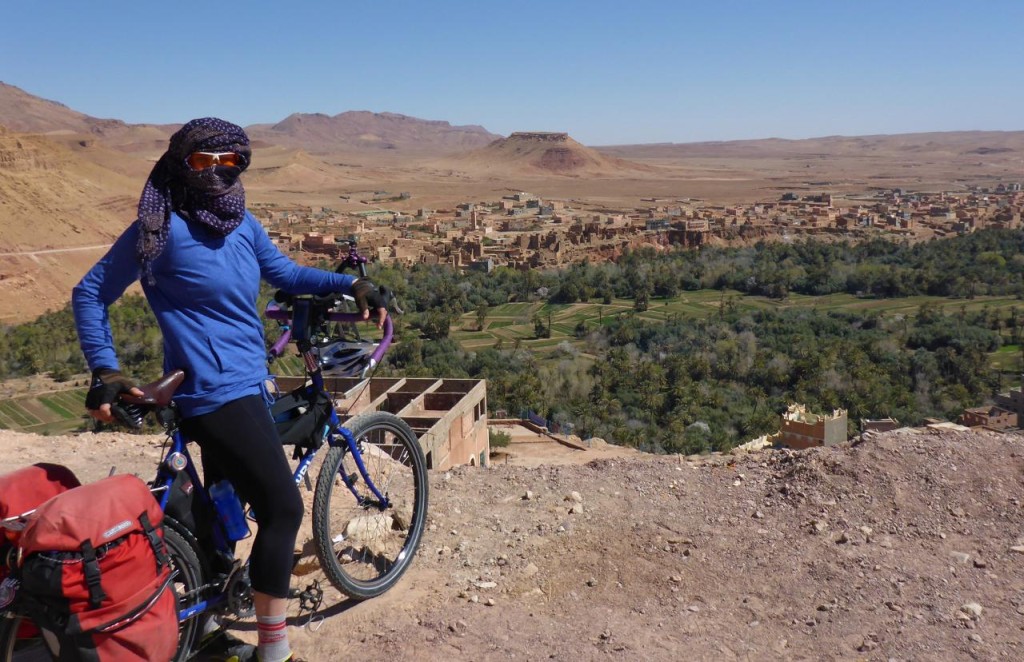 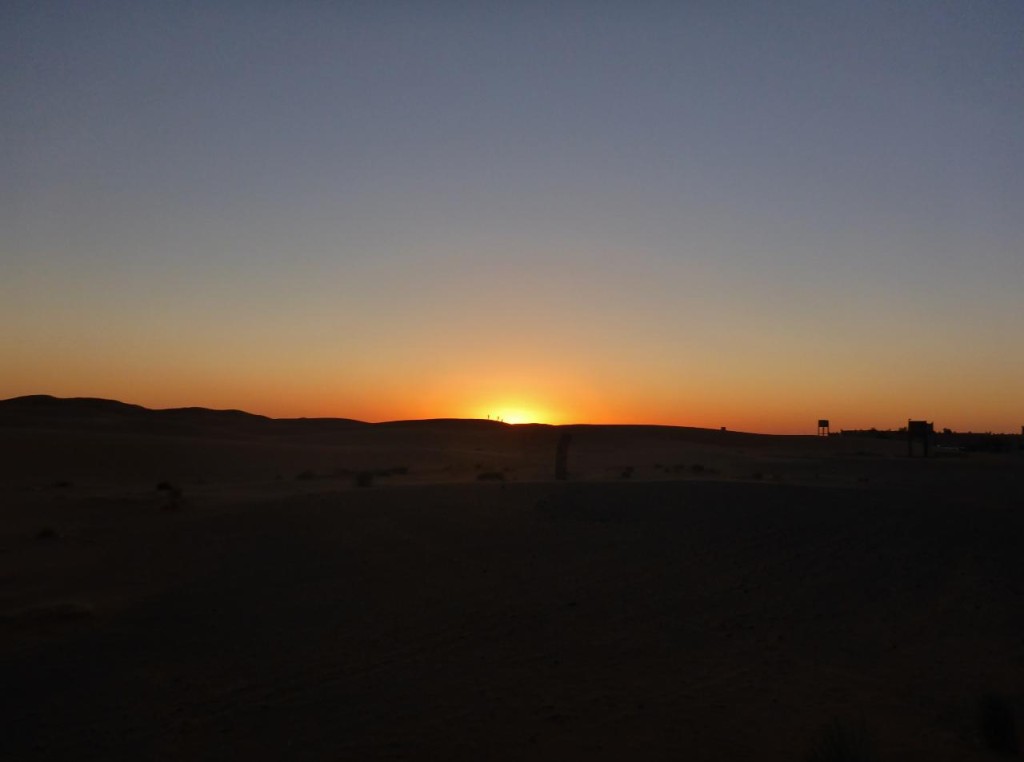 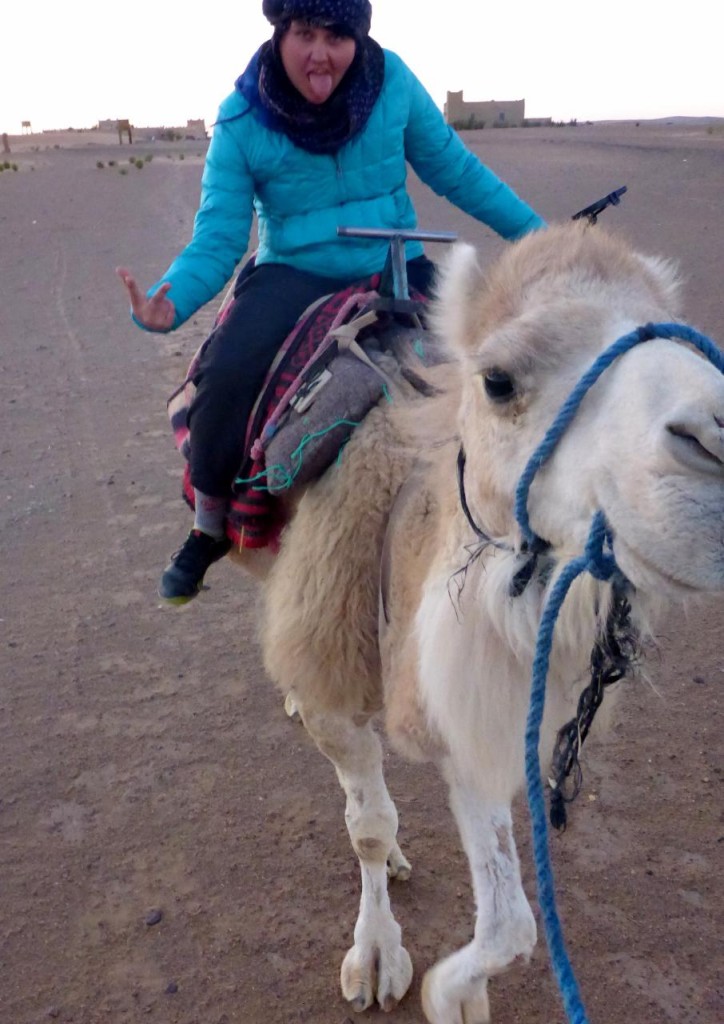 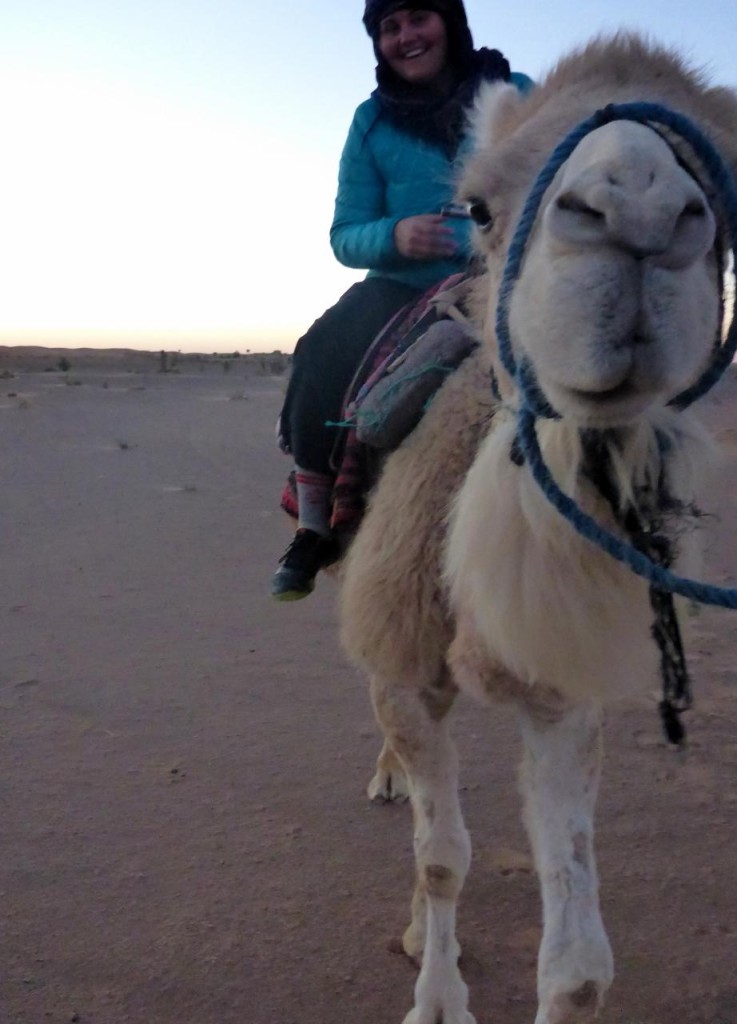 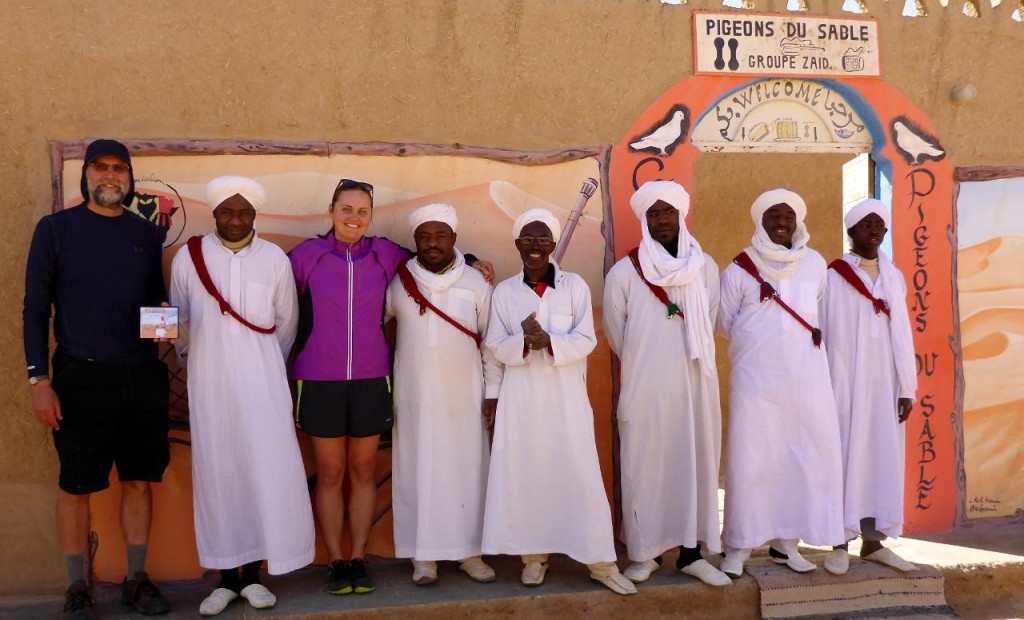 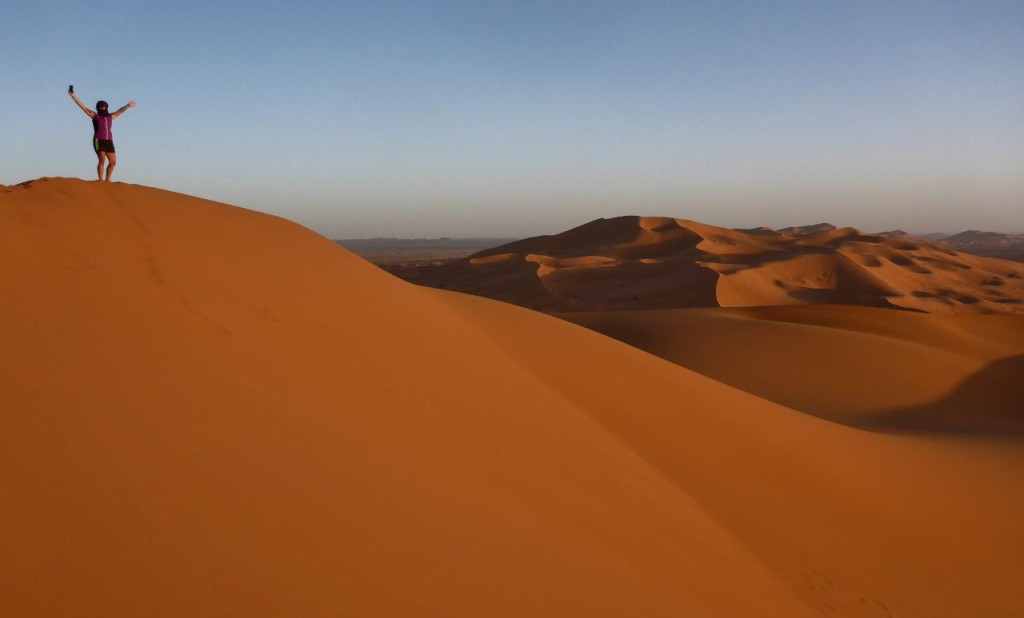 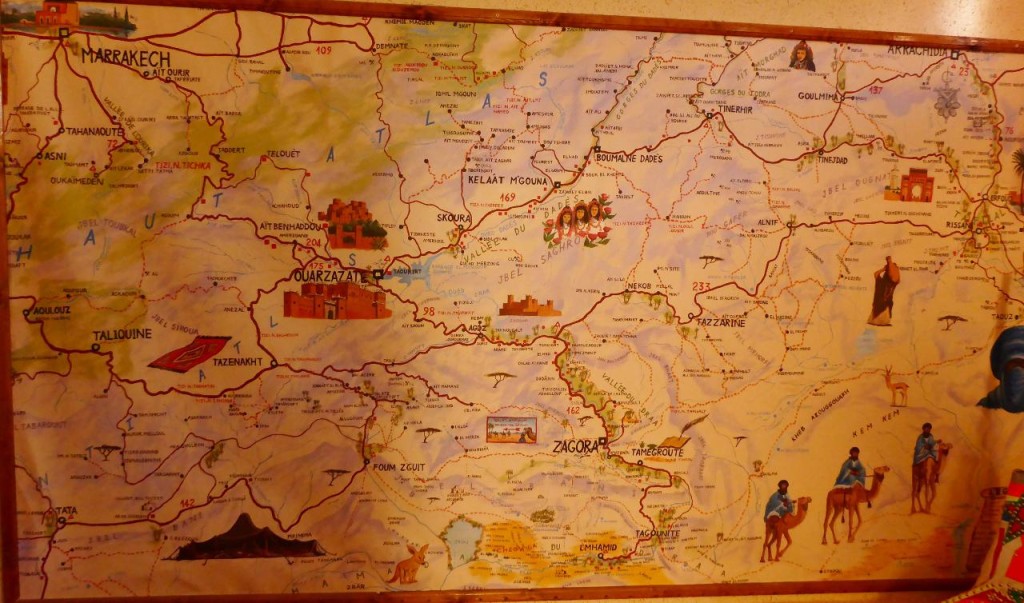