June 11, 2016 We got a late start yesterday as we needed some pesos and our ATM card would not work at the only bank in town. It was 3pm and the bank hours are 9-2 M-F. It is always a good idea to have dollars and we always keep a good amount. We had to wait in town until 9 and then there is always a long line since it is a Friday. I managed to exchange $400 for pesos then after a grocery store trip we were on our way. We were in the lake region and cycled to the largest lake, Lago Ranco (Lake Ranco), where we found a closed campground. The caretaker senora said we welcome to stay and lead us to a lakeside campsite, turned on the power, and the bathroom hot water. What a great backdrop of the snow topped Andes in Argentina. We had a big lunch so after setting up camp we retired inside the tent for a long rest. This Land of the Lakes region is the top outdoors destination in Chile with shimmering lakes, lush forests and rolling farmland, punctuated by the snowcapped volcanoes. It is quite a contrast from the Atacama Desert we rode through in Northern Chile.

This morning was cloudy but we enjoyed riding along the lakeshore and the magnificent view of the Andes as there are many snow covered volcanoes. Jocelyn has been having problems with leaking air in her front tire. We changed the tube yesterday but could not find the source of the puncture. Once again today we changed the tube that has a very slow leak and found a tiny bit of wire in the tire tread. After that we rode through a small village and bought bread for a tuna sandwich. At that point it was close to sunset and since most of this land is private and fenced we rode back a bit to a very old hospedaje (home stay) sign we had seen. It looked very old but it was open and we were guided inside to a room. The senoras were so nice and accommodating and excited that there were Americans in their home. In fact, several people came out to greet us and they served us an excellent fresh farmed salmon dinner! It was delicious. As I have always said this journey is all about the people you meet. Chile is one of the best.

June 12, 2016 This morning we had a wonderful breakfast at the hospedaje from the senoras. We then said our goodbyes and took off for a very nice Sunday ride. Soon we were on a dirt and gravel road where we cycled 22 miles to the next lake, Lago Puyehue, for another magnificent view of the Andes and Argentine. While looking for a place to pitch our tent it started to rain so we settled into a lakeside cabana. A quick trip up the street to the mercado (market) got us ingredients for a hearty soup. The cabana also had a wood burning heater so we bought some extra wood and quickly heated the cabana. The soup and accompanying Chilean wine were excellent.

June 13, 2016 It was another long hilly day around two lakes before finding a cabana in the town of Frutillar on Lake Llanquihue. This lake is the second largest in Chile. Unfortunately, this time of year all the volcanoes which we have passed are covered in clouds. Last week when we were cycling in the rain it was snowing here. Occasionally we do catch a glimpse though. Our riding in South America is quickly coming to an end. 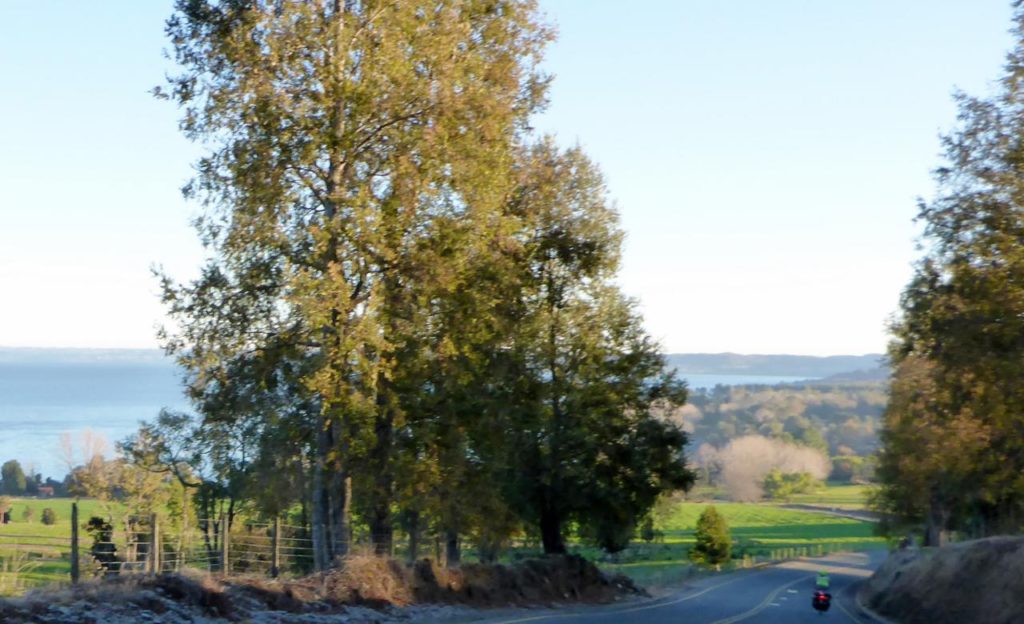 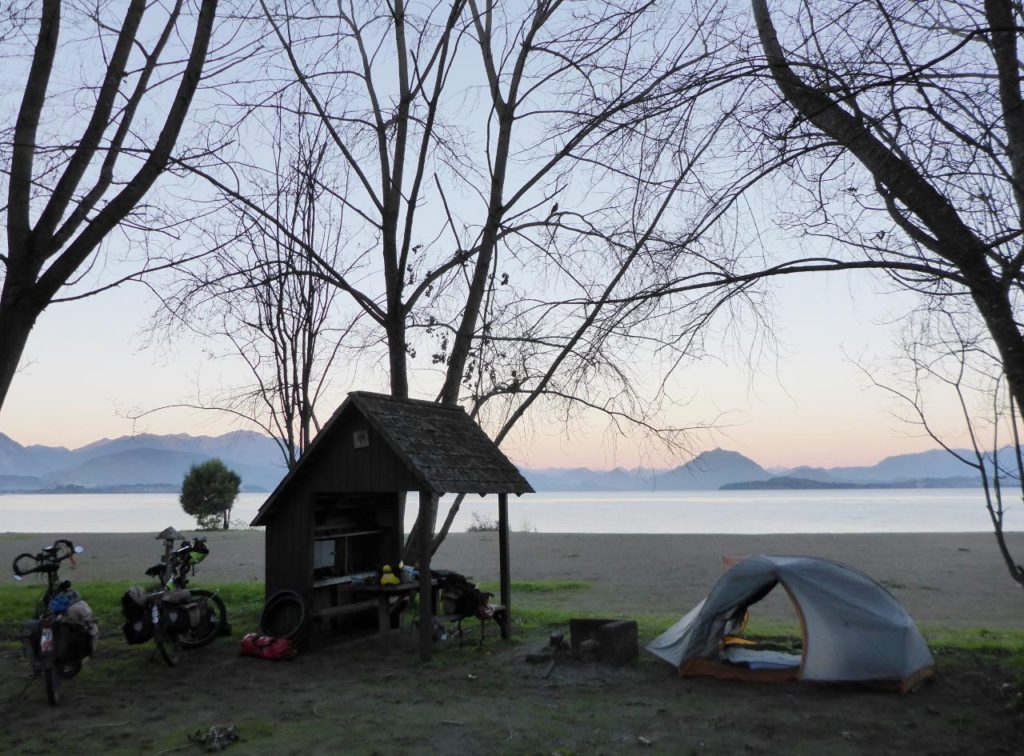 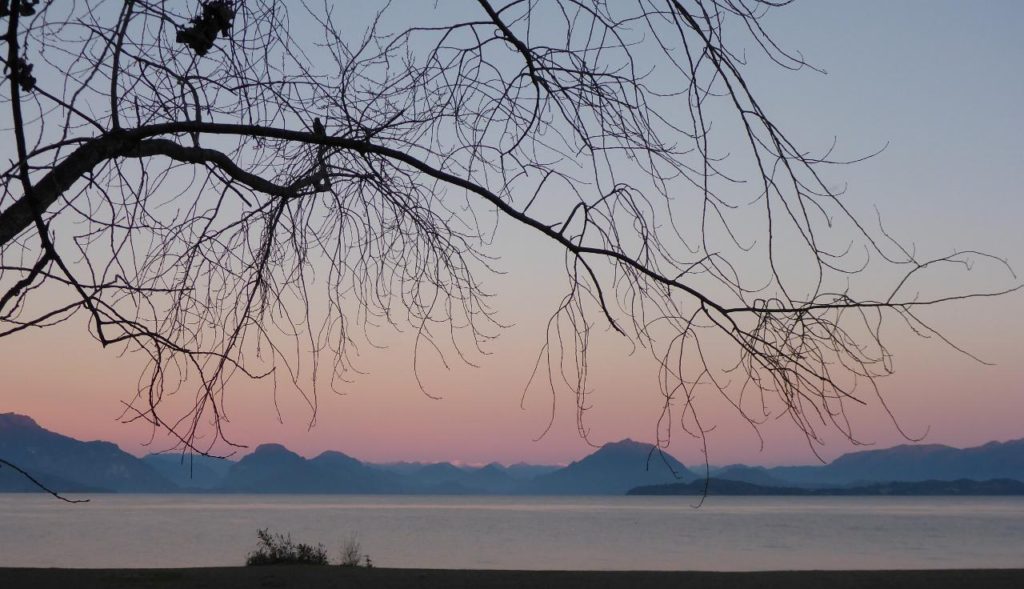 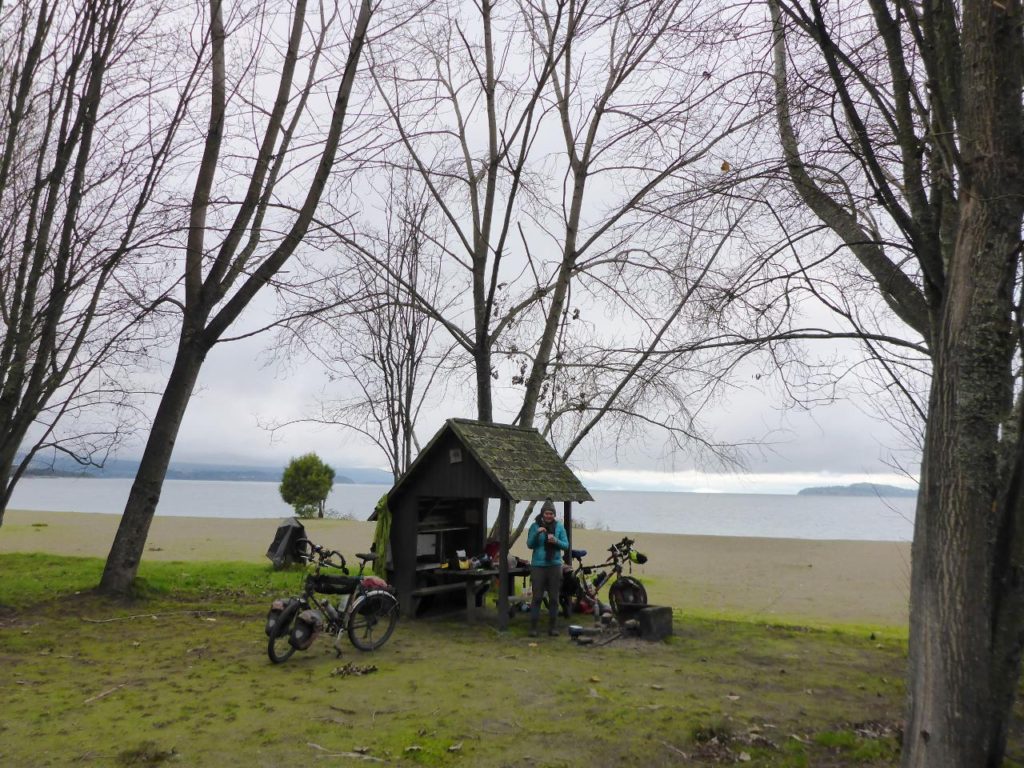