Monday August 4, 2014 74 miles The morning started overcast which we enjoy because the heat isn’t set in yet. We had the last of our excellent buffet breakfasts and rode out with the morning traffic. Baku is a very expensive city built on the gas and oil industry so we considered ourselves lucky to have scored such a comfortable hotel and location relatively inexpensive. And of course there is always the bike issue. If there is not a secure spot for our bikes we move on. Our location was a $6 taxi ride from the Iran Consulate. Yesterday we walked to Fountain Park and sat outside at a nice restaurant for lunch. We met a couple from Texas living and working in Baku in of course the gas and oil industry. They were great to talk with and their world adventures sounded inspiring. As they were leaving they treated us to lunch and paid our check – Thanks so much Stephen and Kathleen!

We quickly worked our way out of Baku and I mean quickly because we had to keep up with the flow or just get bogged down. Once again Jocelyn kept the pace through many one way streets and roundabouts and I just followed. Once outside of Baku we shifted into our cruising mode with the flatness and tail wind. Our speed was up as the hours drifted by. We stopped in an AZOil gas station Kafe for a delicious rice and potatoes lunch. It was served with a giant meatball but as most meat we encounter in these places they are practically raw so we removed it.

Several hours later it was getting late so we started looking for a camp spot when we were flagged down by a guy standing near a small mosque who offered us chai (tea). We stopped and as I looked around I thought this would be a nice place to pitch our tent. With our point-it-book we showed him our tent. After a “Da, da” we followed him to a small cabin and invited us to sleep inside on the two cots. He is the “mosque keeper” and has a cabin close to the road right next to the mosque. Our cabin was closer in towards the main house which was unoccupied at the time. Basically this is very large estate filled with a mosque, animals, and fruit trees. Sawly is the caretaker of this estate and was very hospitable with glass after glass of chai. Once the temperature dropped at around 2 am we slept well!

Tuesday August 5, 2014 45 miles We were up early but Sawly up earlier. He had collected eggs from the hens, bought some fresh bread and put out a nice spread. I collected grape, plums and apples as Jocelyn cooked the eggs. After a delicious breakfast Sawly sent us off with a sack full of fresh fruit. We are really testing our rims now with a 10 liter bag of water and almost an equal weight of fruit!

By 10 am it was already in the 100’s so we stopped at a market for two cold beers. After discussing that in a few days we wouldn’t be able to stop for cold beer we bought two more just because we can. We then continued on for a few more hours until Bilasuvar where we found a nice hotel about 15 km from the Azerbaijan-Iran border. We will meet our required tour guide on the Iran side Thursday morning. We walked through town this morning and enjoyed the small town atmosphere as Jocelyn was looking for a head scarf for our upcoming trip. She found one in a wedding dress store. In this heat wearing long pants and shirt along with a scarf will be difficult for her. She is up for the challenge. 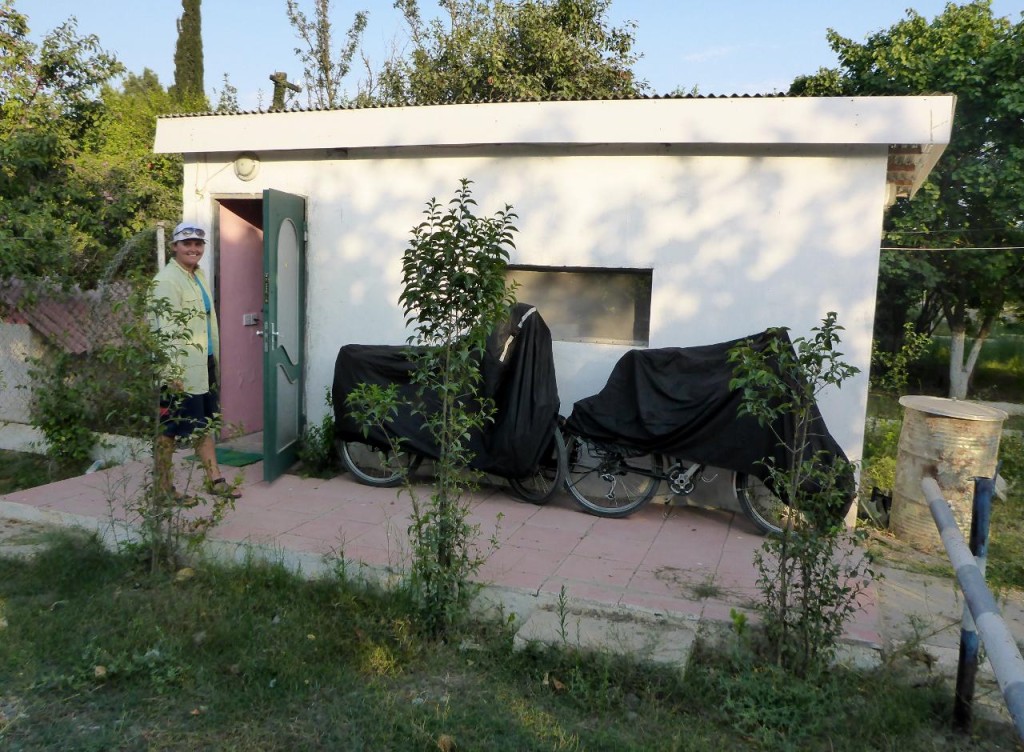 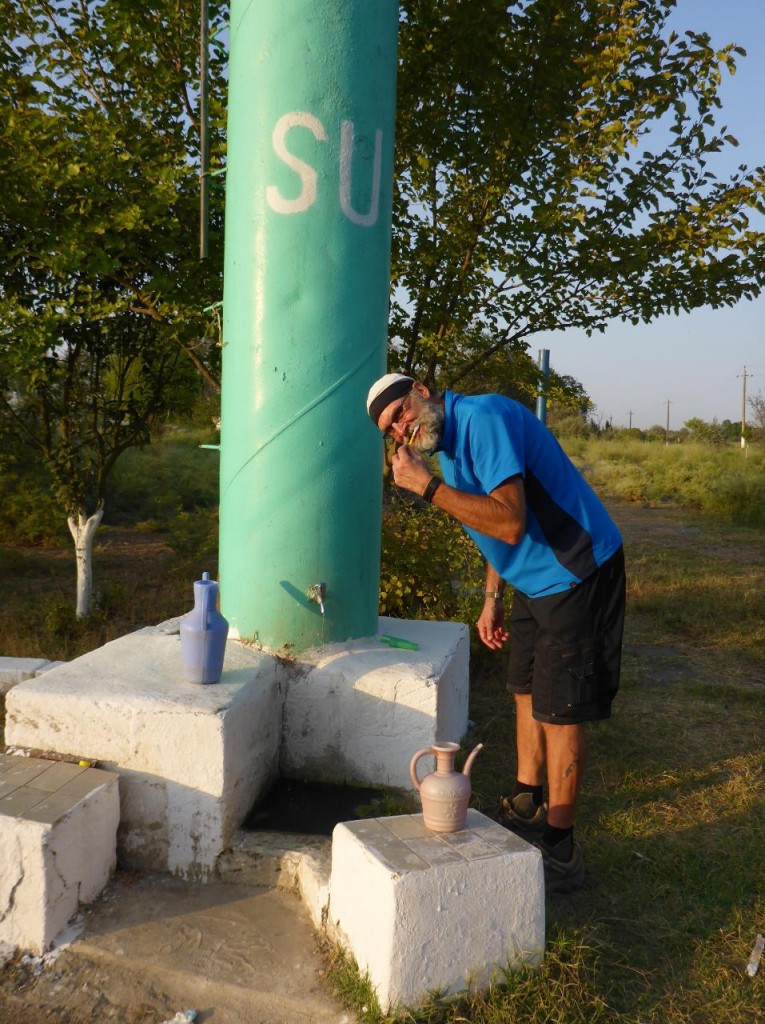