Three days 163 miles We left the Mexico City Hostel and spent two nights with Santiago in his condo about 10 miles from the historical city center. Santiago is an architect and was very busy with a project so we toured around the beautiful University of Mexico and his neighborhood. He lives in a high-rise condo and the daily afternoon lighting storms and rain were amazing. The first night he and a friend Mariana cooked us a great fish dinner. They both cycled through South America to Ushuaia, Argentina a few years ago and gave us some great tips on our upcoming trip there. We are rethinking our time there since it will be winter south of the equator. After a great week in Mexico City we boarded a bus back to Acapulco and his mom’s cliff side townhouse overlooking the Pacific Ocean. It’s funny that when we see a bus pass us while we are cycling we think “what luxury but the people aren’t seeing anything like a cyclist does”. When we are on a bus we think, “How boring is this.” What great timing we had celebrating Mexico’s 205th Independence Day with them. We will always remember this week.

Sunday morning we loaded up our bikes and headed south out of Acapulco. There is a large climb of about 3 miles after leaving the city. The pass is only 960 feet but very steep in parts so we rode some, walked some, and rested in shady areas on this very hot day. Mexico City at over 7,000 feet was much cooler. It was at times a struggle since we haven’t ridden for a week.

On the south side of Acapulco are miles and miles of FLAT beaches. I had to think, “Are we still in Mexico?” Flat straight roads can be very boring but once in a while they are a blessing – and we had a tail wind too! The layout is very similar to Italy last year as there are no public beaches, at least where we are anyway. There are beach clubs and huge resorts. Everything else is fenced off. We had a nice lunch at one of the beach clubs then continued south where late in the day we found a family hotel. We had looked at a few others but they were way overpriced and touristy. We like being with the locals and the Mar Azul Hotel a block from the beach was our stop for the night. An older senorita runs the place and was very nice. As usual we are the only ones here. But at $24 and the beach with a seafood restaurant it was the place for us. We like being away from tourists and enjoy the locals. We swam in the ocean, enjoyed watching the horses and dogs run around on the beach along with a beautiful sunset as we don’t see this in Florida.

The next two days we continued south and stayed in the towns of Cruz Grande and Cuajinicuilata. The riding continues to be hot in the 110’sF. We take many breaks for shade, water, fruit, and Gatorade. Combined with the hills it can be tough but we persevere. The countryside is beautiful and the people very friendly. Our goal in the next three days is a warmshowers host in Puerto Escondido. This small fishing town is known as the Mexican Pipeline (as in Banzai Pipeline, Hawaii). Maybe there will be some surf! 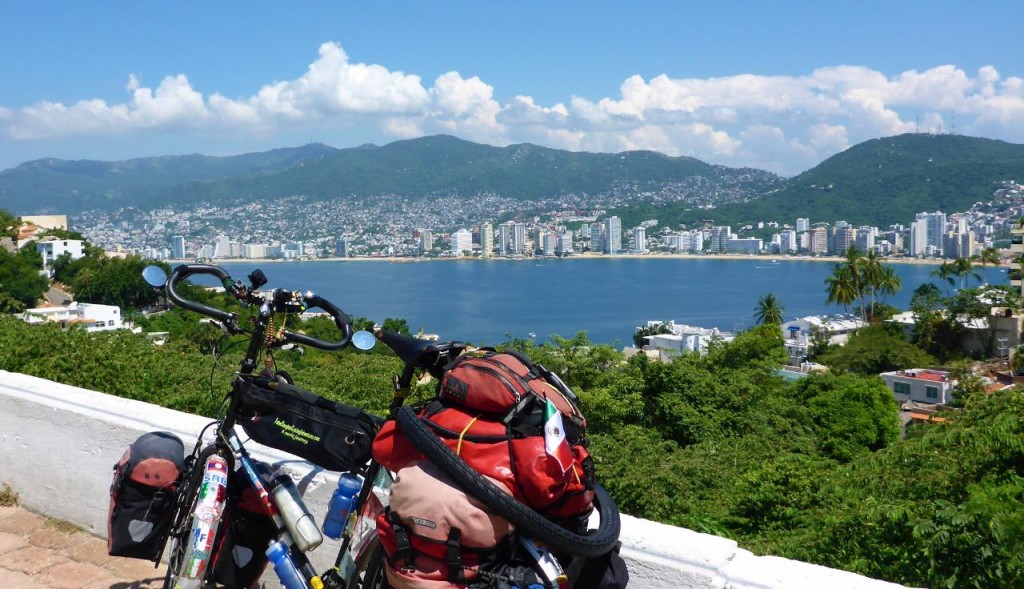