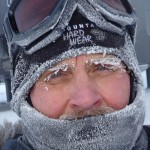 Michael Rice is a retired electrical engineer who worked for almost 30 years on the Space Shuttle Program. He has spent five winters working as a satellite communications engineer in Antarctica at McMurdo Station, Amundsen Scott South Pole Station, and Palmer Station.

In addition to being an accomplished cyclist, Jocelyn is a surfer and athlete. While at Cocoa Beach High School, Florida, she lettered in basketball and track, where she also won a state championship in the discus throw in 2009. This led her to a track scholarship at Western Carolina University, North Carolina. Jocelyn is currently focused on her career in Terminal Security Management at Port Canaveral, Florida.