April 7, 2014 51 miles After an excellent two days with Ludovik and Marisol we biked out of Monaco towards Italy. We stopped in the last town in France, Menton, to search for a France sticker. We are collecting stickers for our bikes in the countries we visit. We quickly found that and ran into two Italian bicycler tourists headed to northern France and Spain to ride the Santiago Pilgrimage trail. After a quick chat we found ourselves in Italy, our 5th country – another banner moment. We quickly noticed that the Italian coast is a lot like Spain as there are steep headlands that drop down to valleys with towns. This continued all day until close to sunset we found a nice campground.

April 8, 2014 62 miles We enjoyed all the frogs, birds and animal noises throughout the night. The campground wasn’t officially open yet but the owner who was working on the restaurant let us pitch our tent for the night. It was a very pretty site overlooking the Med. The day was overcast and started raining a bit. We climbed through the headlands and into many towns and finally rode into Genova. It was rush hour and very challenging as Jocelyn navigated miles and miles of coastline. It was getting close to dark and there was still another 7 miles or so of city so we pulled over for a hotel. We had a warmshowers host penciled in but he wasn’t available until tomorrow. Next door was a bar and pizzeria that was inexpensive and excellent. For some reason I want to watch the movie “The Godfather”. 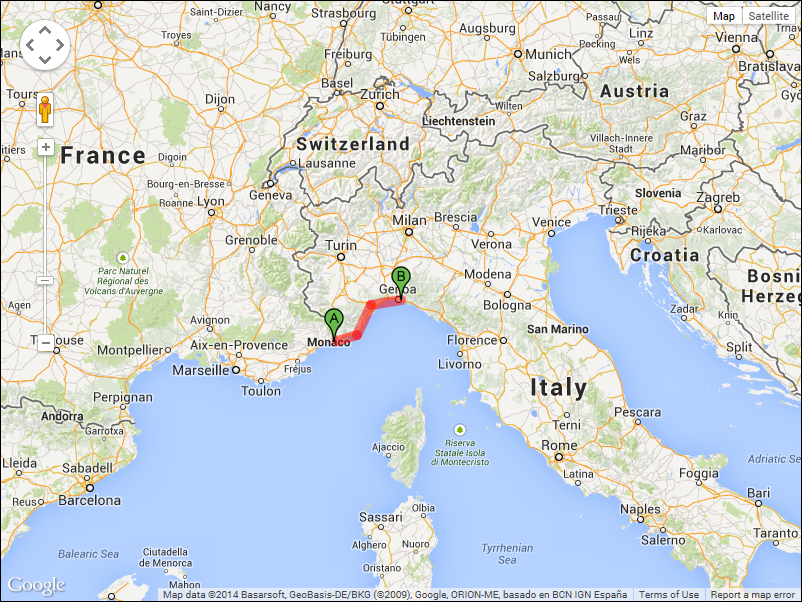