April 30, 2016 We left Pozo Almonte kind of late since we were short on pesos, the ATM wasn’t working, and the bank hours were 9-2. Once again we were ripped off by a bank since they always charge more for a money exchange than the guy on the street. We did change some dollars in Arica with a street guy and got 670 pesos to the dollar. The bank only paid 650. The official rate was 675 so the street guy was once again the best way. We have found banks around the world paying the lowest. We didn’t have much of a choice so we took it.

We continued south through the lava flow desert. These flows are recent as there is no plant life on them. Recent is probably a few thousand years (or more) old. At one point we heard a “popping” sound and thought a gun was being fired. When we stopped to make a tuna sandwich at a shaded bus stop we heard the loud popping clearer and it was coming from the lava. I walked on part of the flow while eating and discovered it was air pressure escaping from lava vents and popping as it escaped. Really fascinating scenery as we ride through this varied landscape. The miles come easy as the terrain is mostly flat and the wind favorable.

We have not had so many good honks, waves, and thumbs up from car drivers, truckers, and even bus drivers since crossing Iran in 2014. By far this has been the friendliest country in South America. Today as we were nearing a rest stop we saw a pickup truck with all the doors open and Barry White blaring from the speakers. In front was an older guy dancing. As we passed he called us over and handed us a plastic bag full of granola bars. I reached in to pick out two and he said “total”, so I took the whole bag. What a nice and fun guy and it was so random with Barry White singing! We talked for a few minutes and he said in Spanish, “Please don’t litter.” That is another pleasing experience – no roadside trash dumping here. Today we continued and stopped near sunset at a lone desert restaurant for dinner. Nobody else was around and we thought it a great place to possibly camp – the Coors beer was cold. The senorita showed us a small clean cabin and at $15 we were sold, moved the bikes inside then spent a few hours in the restaurant eating. After going through all four beers on premises, after all it is Saturday night, the senorita showed us a bottle of red wine that was cheaper than three beers. The bottle of wine has probably been sitting here for years. So we bought that and settled in for the night.

May 3, 2016 The last few days in the desert have been long with camping and rooms. The days are hot and the nights cold. Last night Jocelyn found some ruins to camp in and also set a fire from wood she had carried for several days. Along with that I had two beers which we enjoyed with the fire. On second thought we should have had the beers for breakfast as the south winds pick up during the night and bring a big chill-down as this is the southern hemisphere. It is odd to think that way for us northern hemisphere people. This morning I was up with the sun at 8 and attempted to warm up with a brisk walk through the desert. After about 30 minutes I gave up and crawled back into my sleeping bag to get warm. From there I read my Kindle until 9:30 when it did warm a little. Once the land warms up the winds switch and come from the west. Jocelyn made us tortillas with peanut butter, bananas, and apple. Today we finally found a truck stop restaurant after a few days without anything. We had a delicious lunch, restocked our water, and continued south. We almost ran out of water but had a plan to stop and hold out a water bottle to passing motorists. We are sure that someone would have immediately stopped and gave us water. Tonight we got a room in a small town since in this area both sides of the road are fenced off because of railroad tracks.

May 5, 2016 We continued south towards Santiago and rode into the major port city of Antofagasta. After walking around the historical city center I found a nice city hotel after nine tries. So many that I checked with were “anti-bike” which is the first in several countries. Many of the reception people were just not friendly but this is a big city. The hotel we finally registered in has a very friendly staff and were happy to accommodate our bikes. After 11 days of riding we decided to take a day off for rest and exploring this very interesting city. 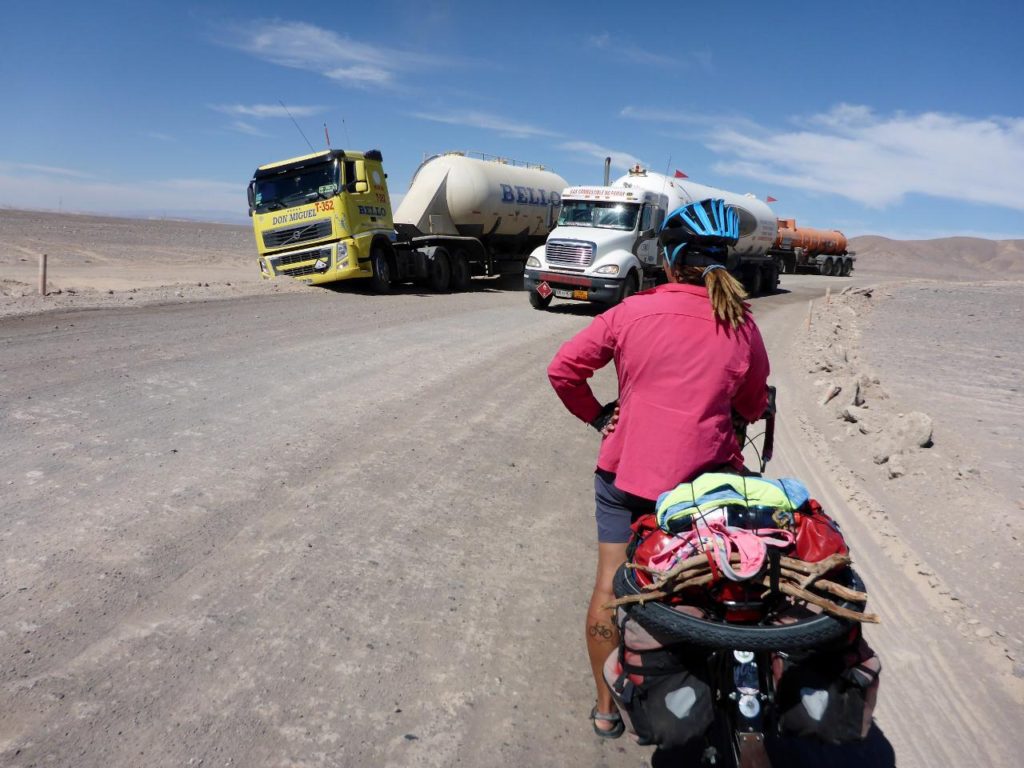