May 22, 2014 45 miles We had a very restful sleep after the last two long days and didn’t get on the road until after 10. The ride through Alexandrupolis was very uneventful and we were soon riding in the countryside on the way to the Turkey border. After 30 miles and four hours we made it through rolling hills, headwind, and reached the Greece checkout point after a brief but very cooling thunderstorm. The ride into Turkey was very interesting as we passed several military units on bridges then four check-in stops. I thought we were in an old World War 2 movie as we crossed bridges with many armed guards. We were passed through and started our journey to Istanbul.

After another 15 miles we stopped at a hotel near the city of Kesan. The hotel was very clean and we stored our bicycles next to a cycling Swiss couple that is headed our way. We ate dinner with them and compared notes. They will cycle Iran as they already have a letter of invitation and being Swiss they don’t require a tour guide as Americans do. We are a bit envious about that. As we were eating an ice cream truck pulled into the neighboring small market with a delivery. After dinner we went there and the freezer was locked full of treats that the owner wouldn’t sell because the prices are not scanned in yet. Oh well. We retired early to read.

May 23, 2014 40 miles We left the hotel early and headed into Kesan. There we found an ATM to get Turk Liras and also a nice place for a quick breakfast. We tried to stop at other places but were basically told that Jocelyn was not welcome. We noticed that in Morocco and now in Turkey. There are “men’s” places where females are not welcome. We caught on to that and found a small place run by women where we were both warmly welcomed. The two women were very nice and would not accept any tip. We had a great “Cuban” like sandwich, delicious Turkey tea, and water. Before we ate military tanks rolled down the street and I recorded some very interesting video.

After we ate we climbed into the local mountains for a very fun ride into a valley to the city of Gelibolu from where we will take a ferry across the canal between the Sea of Marmara and the Aegean Sea. Once again we will take a road less travelled by taking a ferry to the old town of Istanbul (Constantinople). We have heard from many touring cyclists that this is a much better route than taking the busy highway. 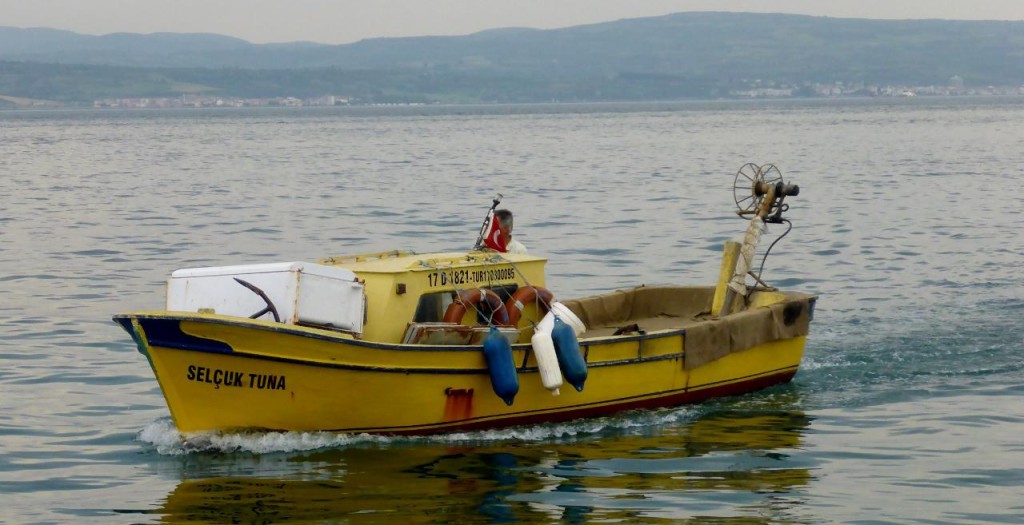