May 8, 2014 37 miles For the past few weeks there has been a clank along with creaks once every revolution of the crank arm. I finally had time to research the issue which pointed to a loose crank arm or bottom bracket. While riding out of town we spotted a bicycle shop and decided to let them look at it as I didn’t have the tools. During the disassembly nothing was noted as being loose so the tech installed a new bottom bracket. I am happy to say that this solved the problem – once again peace and quiet. So far on my new bike the rear rim and the bottom bracket have failed.

We continued riding until Jocelyn said that now her bike was jerking to a stop when using the rear brakes. I rode it to confirm that it was the same problem as my bike had – the rim must have a problem and many of the spokes were loose. We stopped at the next major town, Kosovska and decided to stay there for the night and try to find another bike shop. At the hotel a couple said they would take us along with the rear wheel to the local shop. The “Bike Doctor” tightened and balanced the wheel free of charge. Once again the locals have been very kind.

May 9, 2014 20 miles The following morning there was still a jerking motion while using the rear brake so we rode to the Bike Doctor to investigate. After much time investigating the problem he replaced the rear brakes with V-brakes and that seemed to alleviate the issue. At that point we wanted to be at a warmshowers host in the town of Zajecar but at 2pm we were about 60 miles away as we had spent a lot of time with the very generous Bike Doctor, Dragan, meeting many of the very friendly townspeople who stopped by. His shop reminded me of my father’s auto garage in Oxnard, California. He spent his life working in his mechanic shop during which time many people stopped by daily with car problems or to just say hi. After coffee, tea, cookies, and some fine Serbian brandy the time just flew by so we had a late start to our next warmshowers’ host. We found a ride with Dragan’s neighbor who drove us about 40 miles where we unloaded our bikes and continued cycling. About a mile out of Zajecar we found our host’s farm on which Victor, his wife and daughter live in a very modern and ecologically built California ranch house with a beautiful view. They warmly welcomed us to their farm and invited us to stay in the home’s loft. Victor has done much touring and visiting of places all around the world so we stayed up late after a fine meal and talked about our upcoming route through “the old country”.

May 10, 2014 Victor’s farm is only two miles from the Bulgarian border. Today and Sunday there are car races that start from his turnoff then up the road. Because of this the road will be closed. He knew the owner of the local bike shop and suggested that Jocelyn’s wheel be checked because from now on there will be very few shops along the way. He also had planned to spend the day working on a friend’s ranch. We drove the Surly down into town before the road closed and went along with him to help out his friend who was installing fencing. It was a real hoot to join in this endeavor along with several others as we really enjoy being with the locals. The work was all day, with many pivo (beer) breaks, and very exhausting as Jocelyn and I shaved timbers for posts and set them. After a long day a huge barbeque was set aflame and a great meal enjoyed with more wine, pivo, and brandy. The road finally opened late afternoon and we drove to town to pick up the Surly. This border road was closed all day which we thought very strange but Victor said it is “The Serbian way”!

This was a second failure of our Mavic XM719 rims and the inside cracks were very apparent. The mechanic said that the failure was due to weight. I had researched these rims extensively but can now say they are not good for touring with heavy loads. We have seen and talked with many cycling tourists with far greater loads than ours. The good news was the rim was replaced but the bad news is that it was replaced with another Mavic XM719 as it was the “best” rim the shop had in stock. Along with that the front brakes were replaced with v-brakes. If you are counting we have been in Serbia for four days and have visited four bike shops! We have had a great time in Serbia and consider this country one of our highlights and will miss the people. Tomorrow Bulgaria! 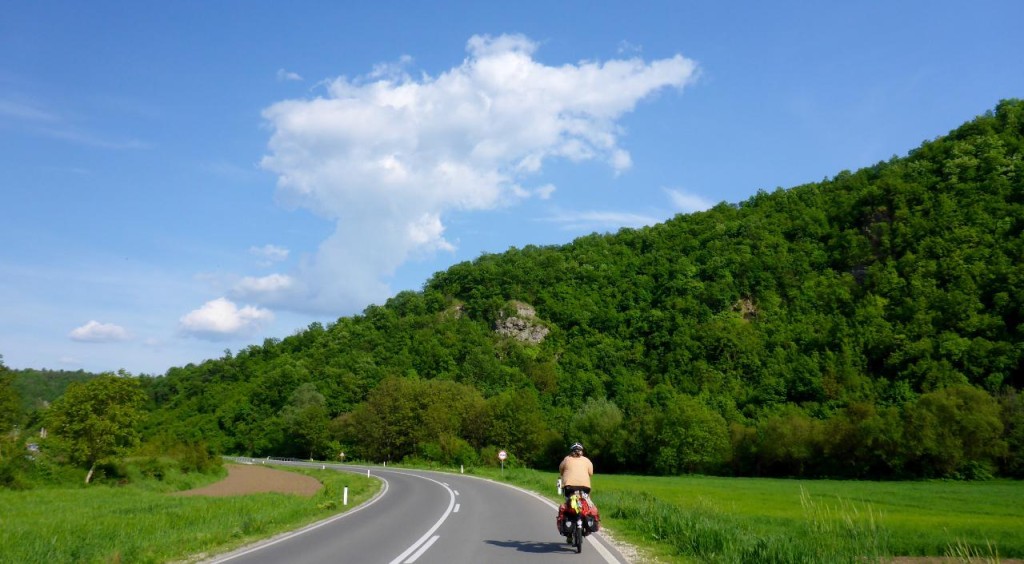 2 thoughts on “Exploring Serbia one bike shop at a time”