January 31, 2016 45 miles After a fun three nights in Bogota it was time to get back on the road. We timed it right because it was Sunday and traffic seemed lighter at least for a while. Before we knew it we were in the thick of traffic trying to negotiate partly on the road and partly on many bike paths. There are over 350 km of bike paths in Bogota. The morning was very tedious until we were outside the city. We felt lucky that neither of us were hit by a car, truck or bus. Many people tried but we outmaneuvered several close calls. Outside of town we soon began climbing and the weather turned cold around 8,900 feet. We stopped and donned some cold weather gear then the road dropped to 6,000 feet and warm again. We arrived in the small town of Silvania where we found a fairly new hotel that cost us less than $12. We love these prices! We had a nice meal in town then settled into our room for the night. It was a great start on our route south towards Ecuador.

February 1, 2016 59 miles We got a good early start and stopped in town for a breakfast of 2 eggs with rice. The first 30 miles was an up and down kind of day then we dropped quickly on a wild downhill into an oven like valley to 1,200 feet. With the temperature at 120 F we did struggle after the cold at elevation. Jocelyn was having trouble with cramping of her legs and we slowly rolled into the town of Espinal where we found an inexpensive hotel. The room was very small and would only fit one bike so we splurged on two rooms. Together the rooms cost $18.50 and this includes air conditioning! Across the street was a good restaurant where we ate bbq’d chicken and soup. Once again sleep came early.

February 2, 2016 30 miles This morning we awoke to a puncture on Jocelyn’s rear tire. It was another tiny tire wire. That makes three and three for us since Canada. We are having continuing problems with Jocelyn’s headset becoming loose every few days. We bought a large crescent wrench in Bogota and are using that to tighten both nuts. We know not to over torque these two nuts. Since we don’t know why this headset continually loosens we are asking if any of the readers have any suggestions. I do have Loctite and am considering a few drops on the nuts so they don’t back off. But there must be a reason it is loosening so quickly. We are trying to get used to Colombian food but since there is so much meat we are having a tough time. All soups come cooked with some sort of bony thing that we remove before eating. The other day Jocelyn received a bowl of soup full of fatty chunks of something. I like chicken but it always seems either over or under cooked. The beans are good though but once again they are full of meat fat. We do well at breakfast though with eggs and rice! But it would be nice to have a simple bowl of cereal, granola, and yogurt.

Jocelyn’s muscle spasms continued this morning. We are eating lots of bananas and drinking lots of water with Nuun tabs, an electrolyte enhanced drink tab I brought from home. The heat is intense. As we are at 4 degrees north latitude it will get worse. We continually take breaks in shady areas but it really got to us today after only 30 miles. So we are taking the afternoon off and resting. 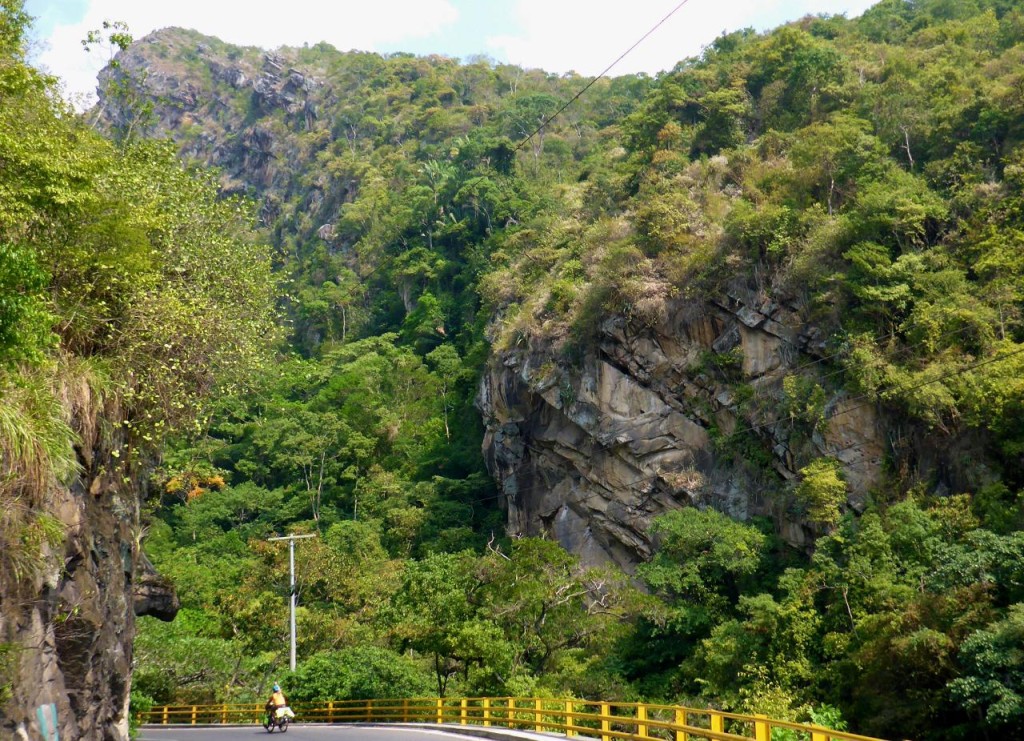