November 7, 2015 Four days 109 miles Our health is back to 100% and that is good because of Jocelyn’s very difficult but inspiring route to El Salvador. The ride and road was adventure cycling at its finest as she found the road less traveled that turned out to be all dirt, rocks and ruts. The first day we crossed a few mountain ranges to find the small cool town of Marcala, Honduras. The climbing was fun but the descents were very difficult trying to keep our speed down while negotiating rocks and ruts. In fact our descents took longer than our climbs. It took almost all day to reach Marcala only 25 miles from La Esperanza.

The next day would prove even more difficult because of heavy rain the night before and more rain in the afternoon with climbing once again much easier than the treacherous descents. I say treacherous because I fell twice. On the descents we had to keep our hands on both brakes as just releasing one for a moment would put us in a perilous speed through rocks and ruts. What a mess as we and the bikes were both covered in mud. We kept our smiles as it was so totally fun – even the falls! The only traffic was an occasional car or motorbike that gave us good honks. After another 20 miles we reached the checkout station for Honduras. With no stamping out we were directed to the El Salvador border where once again there was no stamp to enter. The border guy said our stamp into Guatemala was good for 90 days through Nicaragua. We were 12 days in Guatemala, 16 in Honduras so we have another 62 days to travel through El Salvador and Nicaragua as these countries all count in the Central America visa time of 90 days.

At this point it was getting towards dark and we continued on the extremely rough, muddy, rocky, and rutted road with more walking than cycling as we dropped about 3,000 feet to the next area where there were hotels. We finally found one with a garage – yes one of those auto hotels. It worked for us as our bikes were filthy and we just put them in the garage with a door to a very comfortable room. There was a restaurant on premises where we stuffed ourselves since we only snacked on peanut butter, tortillas, and crackers during the day. The most surprising thing yet is that El Salvador currency is $USD! Fortunately they took Honduran Lempiras and were given change in $USD. We even got a $1.00 Susan B. Anthony coin!

These last two days I thought of our last two days in China last year. We were cycling along a new road project through a mountain range. Chinese road projects are funny in that there are a few people (men and women) every few miles doing some kind of road work be it a new concrete barrier so you won’t go over the steep mountain or digging out some random rock in the way. This is all done manually as there were no power tools. It rained every day and the road was all mud. rock, and red clay. For some reason I had kept several chop sticks in my tool frame bag. These chop sticks turned out to be very valuable because when the clay mud was packed between the tires and fenders the wheels would not turn. So the chop sticks were used to push the mud clay out so that the wheels would once again go around. Every once in a while a town would pop up and there was a motorcycle washing station. We would point to our bikes and the workers, most commonly women, would clean our bikes. There was plenty of water from the Red River that separates China from Vietnam. We did this for two days. It was lots of walking. We spent the night in a banana field trying to hide from the road. The next morning I had a puncture and changed out the tube in a steady downpour before we continued. Once we reached the border town before Vietnam there was truck wash area where the guys thoroughly washed our bikes. We never paid for any of our washes. A few blocks later we passed an auto parts store where I bought a few cans of carburetor cleaner to clean the chains and gears. We then lubed everything. As it was we had a 30 day China visa, spent a week and a half on trains for 2,000 miles, then exited China to Vietnam on our 30th day. We cut it close. Great memories. Honduras was great with very friendly people for the most part. And our first day in El Salvador continued this reaction to us. The mountainous country reminded us of Tajikistan where 90 percent of the country is above 10,000 feet. We topped out at 6,400 feet in the Honduras. We have had many people warn us about El Salvador so we will see what our future holds in this country.

Sunday November 8, 2015 We took our time getting back on the road and enjoyed a delicious breakfast. Then the bikes’ gears, chains, and rims were washed as we prepared for a larger decent. After another 10 miles the road turned paved! How boring is that. We continued over a few more ranges to the town of San Francisco where we found a hotel. Several people have told us to stay off the roads on Sunday afternoons as that is “drunk day” in Central America. Unfortunately from what we have seen we agree. There hasn’t been any Wi-Fi for several days now. We are headed to the coast to catch a boat ride to Nicaragua.

November 9, 2015 It was short 25 mile ride to the city of San Miguel, El Salvador which sits at the base of Volcano San Miguel. We try to stay out of larger cities but we have some business to take care of and this was the only town around to conduct this. Tomorrow we will head to the beach! El Salvador is a small country. 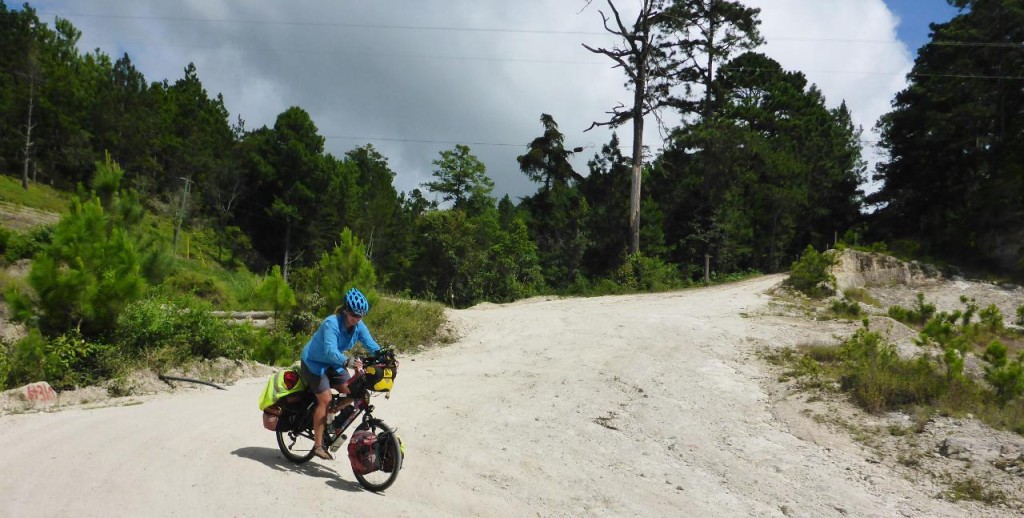 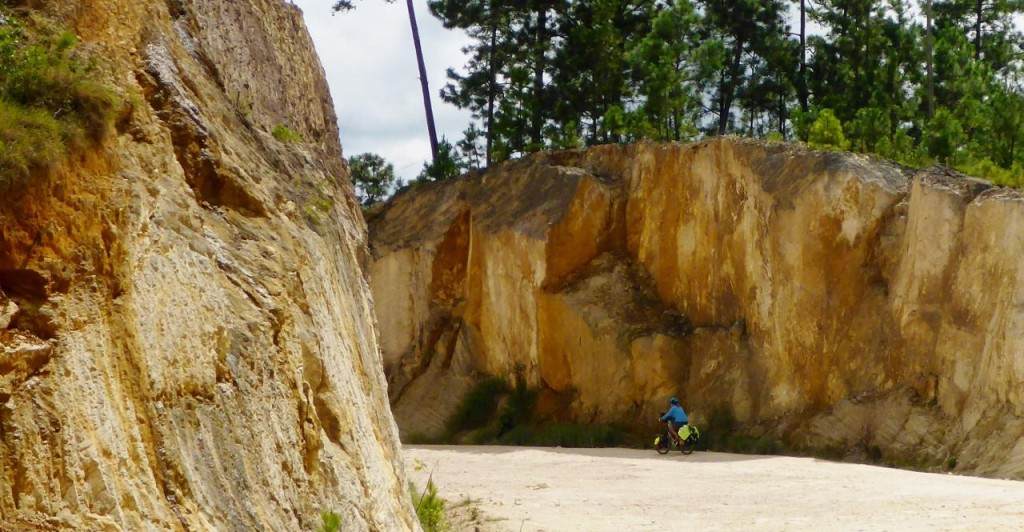 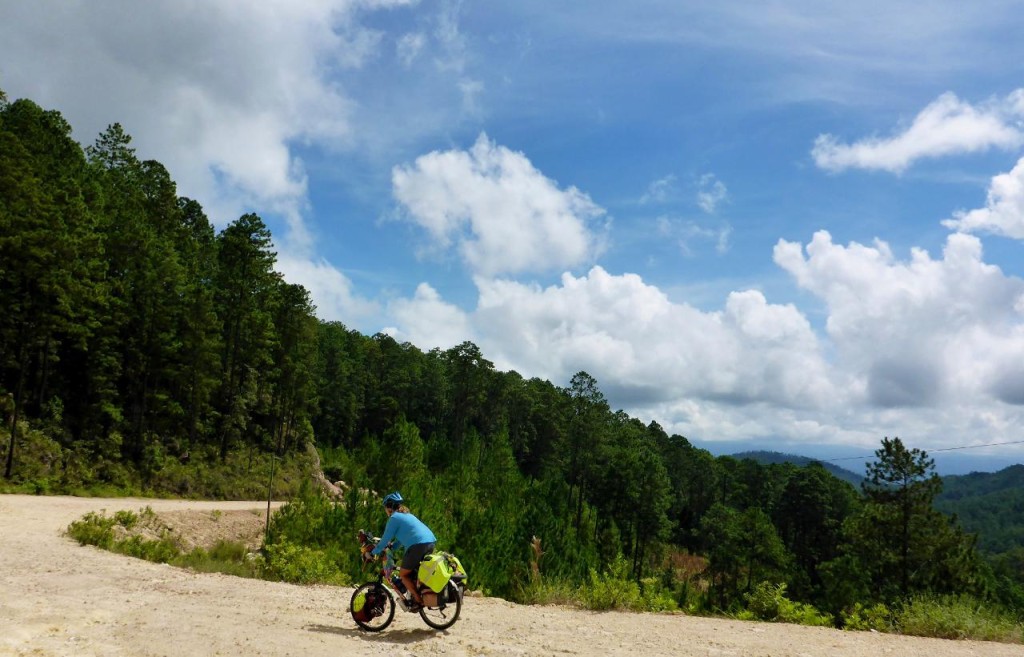 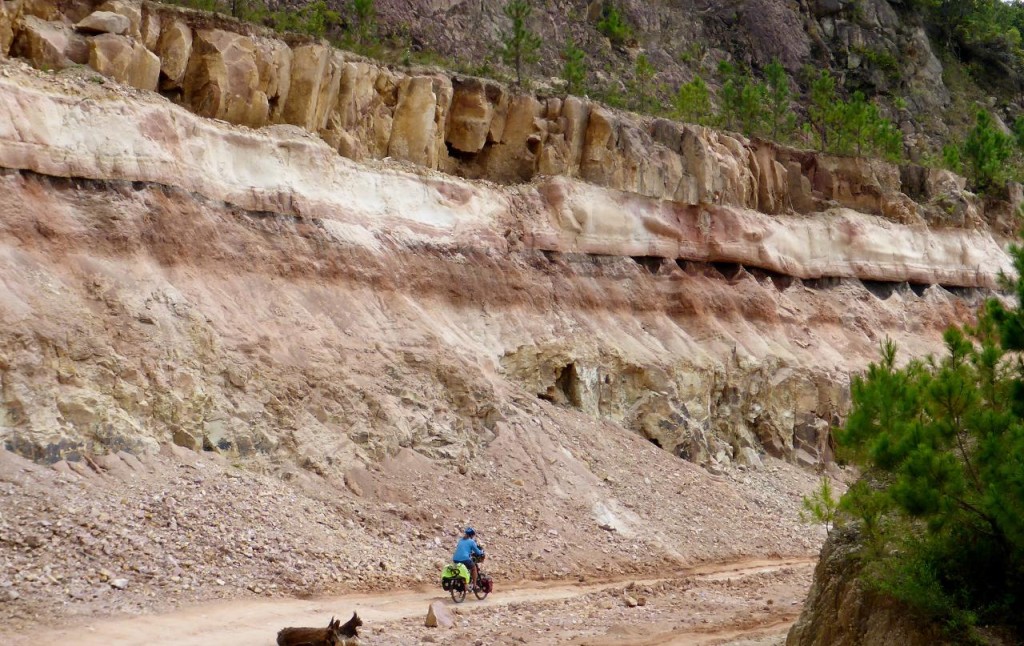 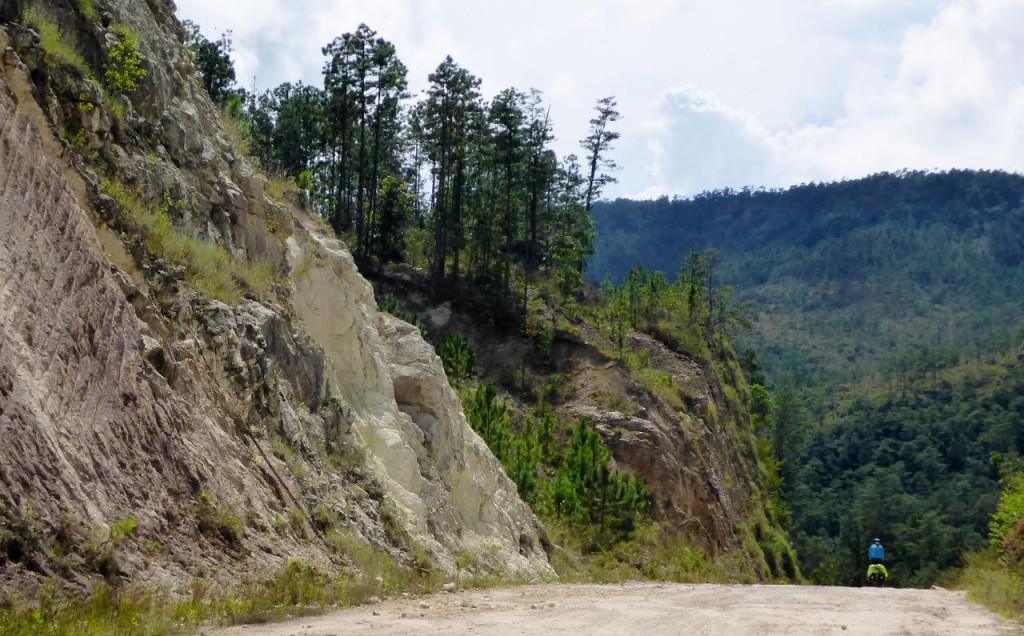 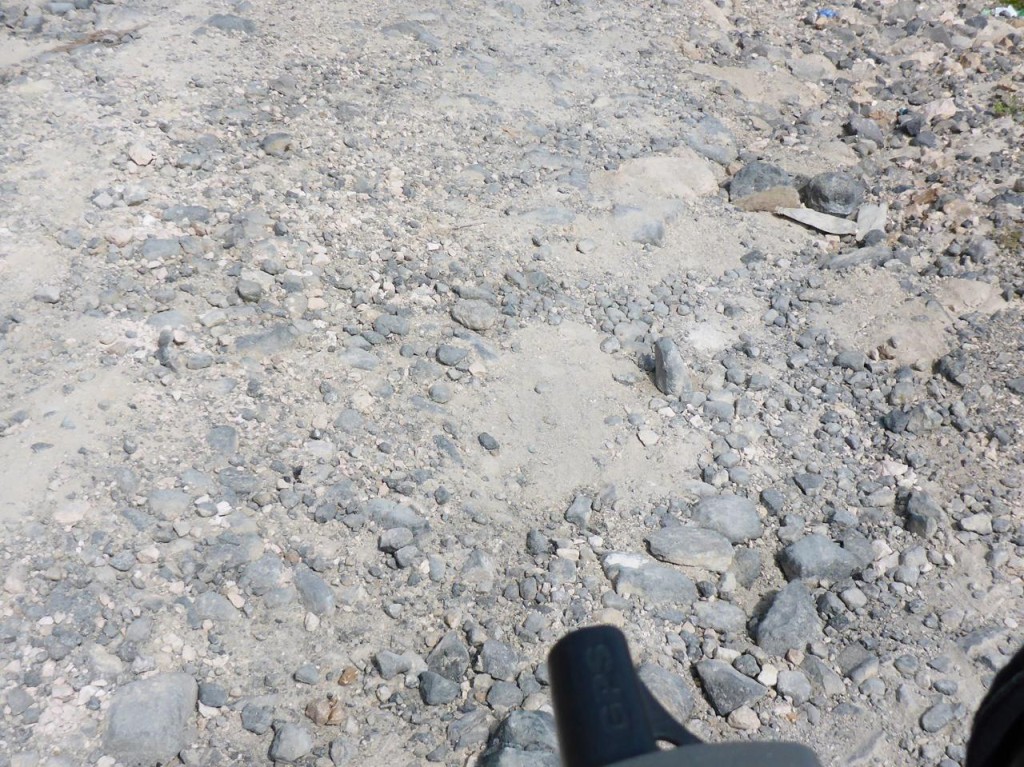 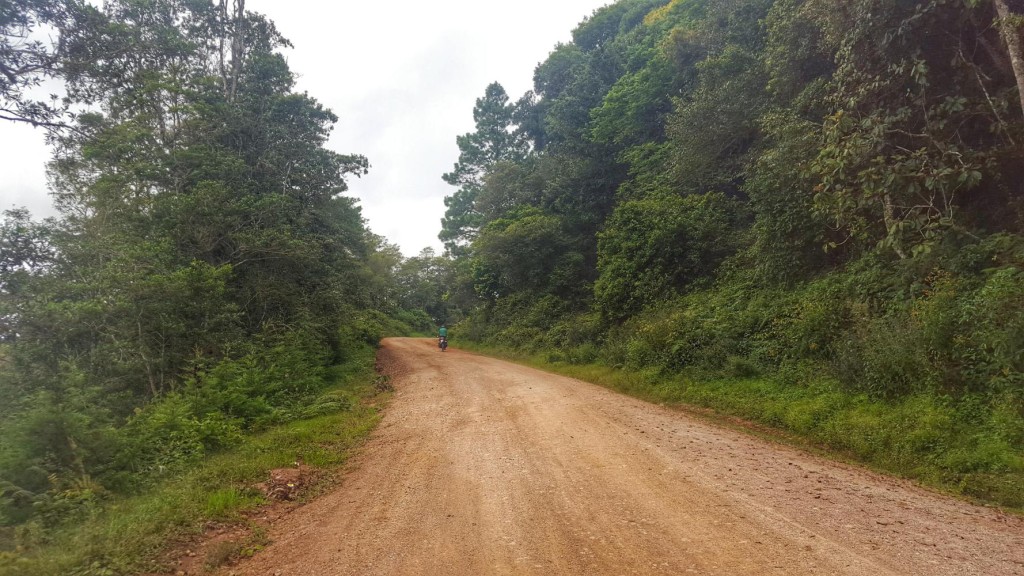 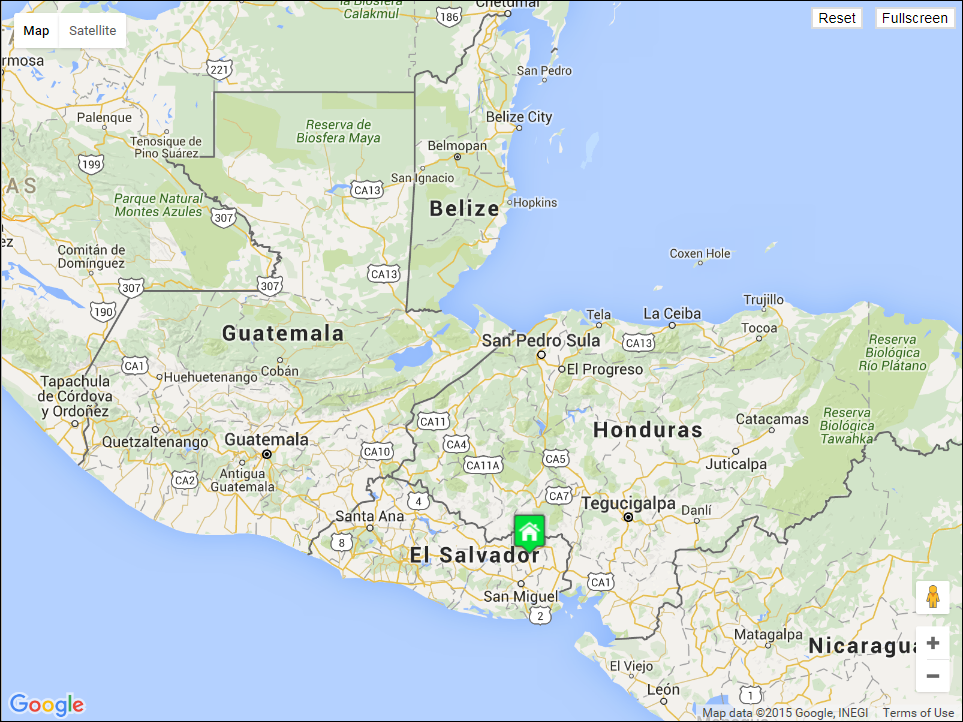